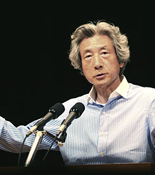 With his wavy hair and well known love of Elvis Presly, Koizumi offered the Japanese public what many hoped would be a change from politics as usual. He was the first prime minister to be chosen outside of the traditional factional power struggles.(1) His choice in cabinet secretaries contained an unprecedented five women and his radical proposals led many Japanese to believe he would bring Japan out of the economic malaise it suffered from the 1990s onward. He was viewed, in the words of one scholar, as "the opposition inside the castle," the anti-elitist's elite (2). Using stories such as the famous "Hundred Sacks of Rice" tale, Koizumi emphasized the possibility of a brighter future for Japan via sacrifice and hard work today(3). He promised that to his administration there would be "no sacred cows." Though he proclaimed an amibtious agenda, during this first administration very few of his reform-minded initiatives cleared the Diet. One notable exception to this was major anti-terror legislation passed in response to the September 11 attacks on the United States. By allowing Japanese Self-Defense forces to take a more active support role in the United States actions against Afghanistan, this law safeguarded Japan's important security relationship with America. Another important event in this administration was Koizumi's historic visit to North Korea in the fall of 2002. Though this first visit of a Japanese Prime Minister promised an improvement in relations between the two countries, continuing tension over the issue of Japanese citizens abducted and taken to North Korea in preceding decades stands in the way. 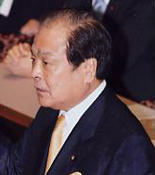 Hailing from Okayama prefecture, Mr. Katayama was first elected to the House of Councillors in 1989. Immediately prior to the Koizumi Administration he served as Minister of Post and Telecommunications , a role he continued in 2001. His spot in the cabinet indicates the importance of postal reform on the Koizumi agenda. 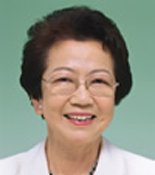 One of the five women in the Koizumi cabinet, Moriyama occupied the most prestigious position. She was the first woman to enter the prestigious Tokyo University Law Department in the late 1940s. Initially elected to the House of Councillors in 1980, she served as Minister of Education in 1992, and Chairwoman of the LDP General Council in 2000.

Daughter of the popular, yet scandal ridden, TANAKA Kakuei, Mrs. Tanaka proved to be no less controversial. She served as a steadfast supporter of Koizumi through his campaign for the LDP presidency and enjoyed broad popularity herself for her populist manner. Later in the this term, however, her tendency to talk "like a truck driver," leaks of confidential information, and comments about US President George W. Bush forced Koizumi to dismiss her and personally take charge of her portfolio until replacing her with KAWAGUCHI Yoriko. 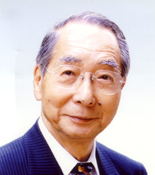 Shiokawa started his political career long before many members of this Koizumi Cabinet. He was first elected to the House of Representatives in 1967 and has been re-elected 11 times. Other key positions held include Minister of Transport (1980-1981), Minister of Education (1986-1987) and Chief Cabinet Secretary (1989). 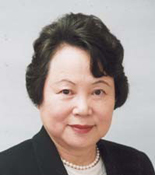 Minister of Education, Culture, Sports, Science, and Technology
(文部科学）
TOYAMA Atsuko
（遠山 敦子）
After graduating from Tokyo University in 1962, Toyama's entry to politics soon followed when she took a position as an official in the Ministry of Education, Science, Sports, and Culture(MESSC), Then with the Prime Minister's office in 1970. Subsuquent to her post in the Koizumi administration, she served as Japan's Ambassador to the Republic of Turkey. 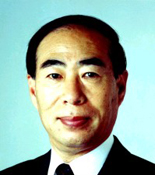 Minister of Health, Labour, and Welfare (厚生労働）
SAKAGUCHI Chikara
（坂口 力）
Komei Party
Sakauchi graduated from Medical School in Mie prefecture in 1965. A leading member of the Komei Party, he took his first cabinet post as Minister of Labor in 1993 under the Hosokawa administration. He served as both Minister of Labor and Health and welfare in the re-shuffled Mori Cabinet in 2000, and shepherded both ministries through their combination into a single ministry during that time. He remains today as the most often reelected member of the Komei party (9 times). He is one of the few members of the Koizumi administration without significant family ties to politics. 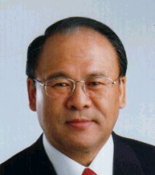 TAKEBE Tsutomu
（武部 勤） Yamazaki Faction
Hailing fom Hokaido and a graduate of Waseda University, Takebe was first elected into the Diet in 1971. Though his career he served on and at the head of numerous committees ranging from transportation to the comfort women issue, Agriculture, Forrestry and Fisheries was his first ministerial post. 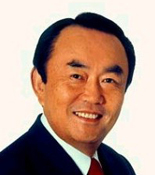 Coming from a long political lineage, Hiranuma graduated from Tokyo University in 1962. He first entered the private sector with Nitto Boseki Corp. His first notable political post was that of secretary to Nakagawa Ichiro, then Minister of Agriculture, Forrestry, and Fisheries in 1978. Elected to the Diet himself in 1980, Hiranuma's first cabinet position was that of Minister of Transport in 1995. Between that post and this point he also served as the chair of the LDP's Finance and Rules committees. 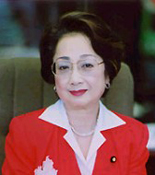 Minister of Land, Infrastructure, and Transport
（国土交通）
OOGI Chikage
（扇 千 景）
Oogi (real name HAYASHI Hiroko) first entered the public eye not as a budding politician or offspring of a former prime minister, but as an actress and television "talent." First elected to the House of Councillors in 1977, her first cabinet portfolio came under the Mori administration with positions as Minister of Consturction, Minister of State/Director of the National Land Agency, and Minister of Transport. 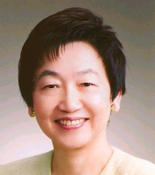 Minister of Environment (環境）
KAWAGUCHI Yoriko
（川口 順子）
Kawaguchi serves as another example of women as pathfinders in the Koizumi administration. After graduating from Tokyo Univeristy with a degree in International Relations in 1965 entered the public service with the Ministry if International Trade and Industry (MITI). After earning her Masters degree in Economics from Yale in 1972, she continued her public career with further positions in the International Bank for Reconstruction and Development (World Bank), MITI, Japan's Embassy in Washington D.C. then as Minister of Environment for the Koizumi administration. After Tanaka Makiko's remarks in 2002, Kawaguchi was assigned as her replacement. 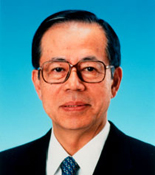 Since the late 1990s, the office of the Chief Cabinet Secretary has been a powerful one. (1). Fukuda was partucularly suited to such a post. The son of former Prime Minister Fukuda, the younger Fukuda left his job as a section chief at Maruzen Petrolem to work as his father's secretary from 1976 to 1978. First elected into the Diet in 1990, he rose quickly through the ranks of the LDP to Chair the Finance committee in 1998, then to Chief Cabinet Secretary in 2000. 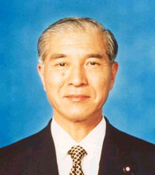 With a degree in economics from Tokyo University in 1959, Murai's early carreer consisted mostly of assignments within MITI with occasional experience in embassies around the world. First elected to the Diet in 1986, he dealt mainly with that body's finance committee which he evetually chaired in 1998. His position in the Koizumi administration marked his first position as Minister. He would later become Governor of his native Nagano Prefecture. 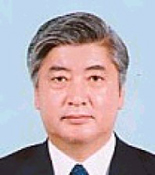 Nakatani graduated from the Japanese Defense University and served with Japan's Ground Self Defense force from 1980-1984 when he retired as as 1st Lieutenant. Immediately following his retirement in 1985, he served as secretary to then Defense Minister Kato. He was first elected to the Diet in 1990 and served as Director of the LDP's National Defense Division starting in 1996. Immediately preceding this post, he served as Senior State Secretary for home affairs under the Mori administration. 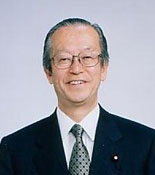 In 1956 Omi began his career in public service in MITI. He served at consul at Japan's mission to New York from 1970 to 1974. In 1983 he was elected to his first term in the Diet and worked his way through a number of trade policy and finance committees. By 1995 he was chair of the Diet's Standing Committee on Finance. In 1997 he recieved his first cabinet post as Minister of State for Economic Planning. In 2000 he served as acting Secretary General of the LDP. In the first shakeup before Koizumi's second term, Omi would be replaced by HOSODA Hiroyuki. 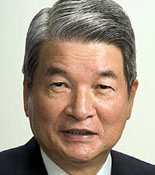 Yanagizawa entered the Ministry of Finance immediately upon his graduation from Tokyo University in 1961 and worked there until his appointment as Japan's Consul in New York from 1971 to 1975. From 1978-1979 he served as Secretary to the Chief Cabinet Secratary under Ohira. After some years working with the LDP, his first Ministerial post came in 1998 as Minister of State and Director of the National Land Agency. He endured broad criticism in January 2007 while serving as Abe's Secretary of Health, Welfare, and Labor for referring to women in an off-handed manner as "baby-making machines." 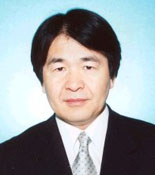 Possessing a PhD in Economics from Osaka University, Takenaka was the most academic minister in Koizmui's Cabinet. After university, he workded for the Japan Development Bank from 1973-1974. He left the JDB to study capital investment at Harvard, then Pennsylvania. He returned to Japan in 1982 to a position at the Ministry of finance and worked there until completing his PhD. In the Koizumi Cabinet he served as one of the foremost proponents of postal privatization. 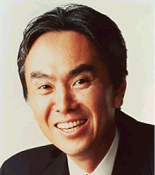 The son of a Diet member and outspoken mayor of Tokyo, Ishihara admits his interest in politics was cultivated from an early age. Upon his graduation from Keio University in 1981 he worked for the Japanese news giant NHK until 1990 when he claims the Recruit Scandal urged him to pursue a life of public service (4). Since that time he served on a wide variety of committees and interests. His post with Koizumi administration marked his first ministerial position.