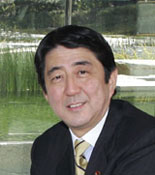 Prime Minister (総理) 9/06/2006-8/26/2007
ABE Shinzo
安部 晋三
After a disasterous defeat in the July 2007 House of Councillor's election, Abe was forced to re-shuffle his cabinet. Ostensibly this action was to try to regain some public support for the LDP before pending lower house elections in 2009. The makeup of the cabinet, however, hinted at other motives. Abe's lineup of faction leaders and power-brokers rather than reformers pointed more to a consolidation of his power-base within the LDP than to concessions to a frustrated public. (1) Notable differences between this cabinet and the last were the movement of ASO Taro from Foreign Minister to Secretary General of the LDP, and the exit of KOIKE Yuriko as defense chief amid a widely publicized feud with a subordinate. 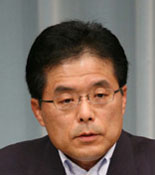 Minister of Internal Affairs/Postal Privatization/Decentralization
(総務・郵便民営化・分権改革）
MASUDA Hiroya
（増田寛也)
An alumnus of the Tokyo University class of 1977, he entered the Ministry of construction upon graduation. In 1995 he stood for and was elected to the post of Governor if Iwate Prefecture. He was the country's youngest governor at that time. He served three terms until leaving the post in 2007. 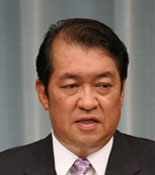 HATOYAMA Kunio
（鳩山邦夫）
Tsushima Faction
Like many other Japanese politicians Hatoyama's political pedigree is long. His grandfather Hatoyama Ichiro was Prime Minister from 1954 until 1956. His father served as both a bureaucrat and Diet member. The young Hatoyama's career started immediately upon his graduation from Tokyo University in 1972 when he served as secretary to then Prime Minister TANAKA Kakuei then later for his father, Iichiro. He served as Minister of Education in 1991 and Labor Minister in 1994. His brother, Yukio, is the current Secretary General of the DPJ. Hatoyama himself has a history with the DPJ. Concerned with reform, he left the LDP in 1993 only to return in 1999. 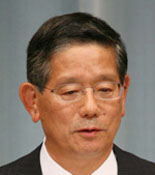 MACHIMURA Nobutaka
（町村 信孝）
MACHIMURA Faction
Current leader of his own faction/Seiwa Policy Research Council, Machimura's appointment to this post lends creedence to the notion that this cabinet is Abe's attempt to solidify his power within the LDP rather than appeal to voters' desire for change. His career is typical for most Japanese politicians. After graduating from Tokyo University he entered MITI in 1969. His 13-year career included a posting in New York and leadership posts in MITI's Energy Policy Bureau. Machimura's first Diet seat came in 1983, and his first cabinet post came as Minister of Education in 1997 in the Hashimoto Cabinet, then again in the Mori Cabinet in 2000. During the Third Koizumi Administration, he held the post of Foreign Minister until it was given to ASO Taro. 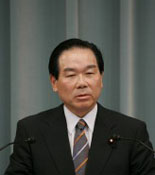 Graduating from Waseda University in 1968, Nukaga worked as a politics reporter for the Sankei Shimbun. His first electoral victory came in the 1978 Ibaraki Prefectural Assembly election. Following that, he was elected to the Diet in 1983. In 1997 he took the role as deputy Chief Cabinet Secretary for the Hashimoto Administration. In 2003 he chaired the LDP Policy Research Council, then 2004 he chaired the party's Research Commission on Security. He served as Minister of State for Defense during the Third Koizumi Administration. 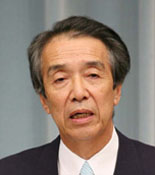 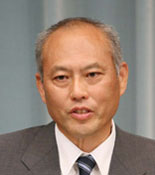 MASUZOE Yoichi
（舛添 要一）
After Graduating from Tokyo University in 1971, Masuzoe stayed on as an assistant until leaving to be a Visiting Researcher at the University of Paris from 1973 to 1975. He continued Researching in Geneva unil 1978. From 1979 to 1989 he returned to his alma mater to work as an assistant professor. In 1989 he started his own research institute then was elected to the House of Councillors in 2001. This marks his first cabinet position. 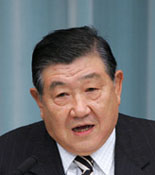 WAKABAYASHI Masatoshi
（若林 正俊）
Mori Faction
After the resignation of ENDO Takehiko over Accounting irregularities less than a week after his appointment to this post, Wakabayashi again took this role as he had done in the First Abe Administraion. 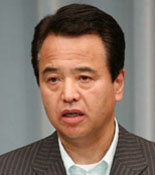 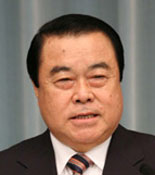 Minister of Land, Infrastructure, and Transport/in charge of Tourism, and Ocean Policy （国土交通） 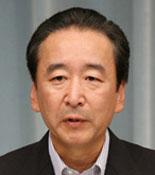 Minister of Environment, in Charge of the Climate Change Problem
(環境・地球温暖化問題担当）
KAMOSHITA Ichiro
（鴨下 一郎）
Tsushima Faction
A medical doctor with a degree from Nihon University, Kamoshita was active in the healthcare industry until his election to the Diet in 1993. Since that time he held a wide range of leadership positions in the lower house ranging from Judicial Affairs to Health and Welfare. This post is his first Cabinet position. 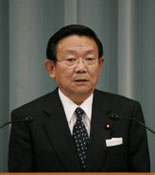 YOSANO Kaoru
（与謝野 馨）
NIWA/KOGA Faction
A 1963 Tokyo University Graduate, Yosano worked for the Japan Atomic Power Company for five years he left to become a secretary for NAKASONE Yasuhiro in 1968. He was first elected to the Diet in 1976. In 1994 he served as Minister of Education for the Murayama Administration. 1996 saw Yosano serving as Deputy Chief Cabinet Secretary. 1998 saw him as Minister of After losing his seat in 2000 to DPJ contender KAEDA Banri. Yosano came back to politics in a proportional district in 2003. In 2004 he served as Chairman of the LDP's Policy Research Council. Before this post, he was Minister of State for Financial Services and Economic and Fiscal Policy for the Third Koizumi Administration. 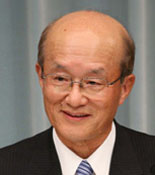 IZUMI Shinya
（泉 信也）
NIKAI Faction
A civil engineer with a degree from Kyuushu University, Izumi worked in the Ministry of Transport starting in 1961. In 1992 he stood for and won election to the House of Councillors and served there in numerous capacities. He has worked as Vice-Minister for both the Land and Transport and Industry and Trade Ministries. In 2005 he Chaired the upper-house committee on ethics and elections. This ministership is his first cabinet post. 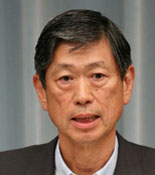 KOUMURA Masahiko
（高村 正彦）
Komura Faction
Komura graduated from Chuo University in 1965 and passed the bar in 1968. He was first elected to the Diet in 1980. In 1996 he served as Interior Minister/Minister of State for Economic Planning, then in 1998 he served as Foreign Minister. In 2003 he ran unsuccessfully for leadership of the LDP, but his power within the party is still very real. This leads one to believe his presence in this cabinet is most likely meant, at least in part, to solidify Abe's standing among the party faithful. 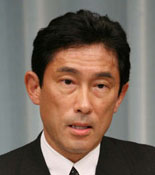 Minister of State Okinawa/Northern Territories, Declining Birthrate
(沖縄・北方・少子化）
KISHIDA Fumio
（岸田 文雄)
Kishida Graduated from Waseda University in 1982, then was employed by the Long-Term Credit Bank of Japan. He resigned in 1987 to become secretary to his father, a Diet member at that time. Kishida himself won his first Diet seat in 1993 from Hiroshima Prefecture. In 1999 he served as Parliamentary Vice-Minister for Construction, and 2001 saw his appointment as Vice Minister of Education, Science, and Culture. He has served in various leadership posts within the LDP including chairmanships of committees on Health, Labor, and Welfare, as well as economic and financial matters. This post comes as his first full cabinet position. 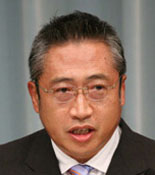 WATANABE Yoshimi
（渡辺 義美）
Watanabe attended Waseda University for Economics and Chuo University for Law. He worked as secretary to his father who served as Minister of Trade and Industry for Nakasone, then Foreign Minister for Miyazawa. After his father's passing in 1995, the Younger Watanabe was elected to the Diet himself, and made a spash with a flurry of legislation(2). He replaced the scandal tainted SATA Genichiro in the First Abe Administration 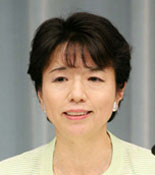 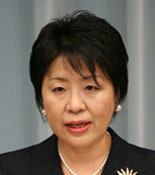 Minister of State for Social Affairs: Declining Birthrate and Gender Equality
(少子化・男女共同参面）
KAMIGAWA Yoko
（上川 陽子）
Koga Faction
Holding a degree in international relations from Tokyo University, Kamikawa proceeded to Harvard as a Fulbright Scholar to earn a Master's Degree. She worked briefly as a US Senate staffer before returning to Japan in 1988 to work as a researcher for the Mitsubishi Corporation. She was first elected to the Diet in 2000 from Shizuoka Prefecture. Past leadership posts for Kamikawa include the Chair of the LDP Women's Bureau and a position with Interior Minister Takenaka in 2005 with the Third Koizumi Administration.